Just a little heads-up: my personal political views are expressed in this post

Before the World Crashed and Burned

A while back, when I was going through all the craziness that was my senior year, I made a POST. In that post, I said that when I had the time, I would sit down and explain why I had fallen so far behind in my senior project. I feel like it’s important to note that I’m a planner and my degree required that I do a senior overview. A senior overview is just a fancy way of saying independent study. I had to write a full-length screenplay without any adult supervision. 😉  I feel like the whole purpose of this independent study was to test what I’ve learned but most importantly, to see if I could stay focused and meet deadlines like the “real world” would require of me.

Well, first off, I knew the overview was coming up so I started planning for it back in October of 2016. I came up with a few interesting ideas. I wanted to do something that was reflective of the high school experience now that my college experience was coming to an end and I had four years of distance between me and high school. I found one that I really liked and I started developing the characters and plot. I even started outlining. It was a spunky, edgy, mystery about a girl who died while attending a private boarding school. Everything was going just fine and then the election from hell happened.

After the World Crashed and Burned 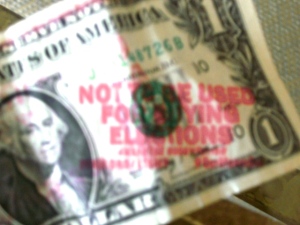 “Not to be used for buying elections.”

What can I say? I saw it coming but there was still some part of me that had hope. Maybe it was because it was my first time voting in a presidential election? Maybe it was because I am a millennial and I went to a pretty liberal artsy school? Or maybe it was because I just placed too much weight on the shared human experience? Whatever it was, I wasn’t completely blindsided by the results but I was emotionally wrecked by it…and that’s something that I didn’t aspect to happen. It completely destroyed my mood for writing, for hanging out with friends, for engaging with others. Looking back on it, I can clearly tell that this was depression. And I wasn’t the only one having these feelings. All across the country hundreds of thousands of people were having similar reactions but I would like to point out one thing: we are not sore losers. The election wasn’t just about the people appointed to an office but a war of ideology. And for some of us, this was the first time we truly saw and felt the presence of the “silent majority”.

It changed my social life and the people I hung out with because, after the percentages of who voted and what they voted for came out, certain people on campus stopped hiding or pretending about their political views. It actually caused a lot of tension on campus because everything became extremely politically charged, as it should. The majority of my alma mater’s student population are White Americans but we also have a very large percentage of minority, international students (study abroad or exchange students), and students of non-Christian faith.  And so all of the political rhetoric that we’d been hearing throughout the campaign stage became a real fear for students that the rhetoric was aimed at.

So all the tension on campus coupled with my own internal turmoil made writing a no go. The edgy but upbeat mystery I’d been developing was dead. I couldn’t even bring myself to touch it. I didn’t feel like writing and I couldn’t force myself to write anything happy so I decided to write something sad…but this idea formed in late January of 2017, nearly three months later.

The story that started to develop in January was very dark and moody. It was about a girl who was dealing with survivor’s guilt after surviving the car crash that killed her sister. Over the course of the months that passed, it went from being a family drama to a character study on how grief affects communities. I was still in my little slump so I really didn’t want to write but as the months moved along, I knew that I needed to write or else I wasn’t going to graduate. So as I put on my big girl pants and tried to force myself to write, life started happening to me. I got a new job, started working and then taking on a lot of hours because the place I worked at was understaffed. I started this blog (all of this is the reason the content for the blog is so fragmented those first three months). Classes started back up which meant that homework and classwork and projects started rolling in. And then all the stuff you needed to do in order to graduate started happening and before I knew it, I had 2 weeks left to write my full-length feature and I only had about 27 pages done and half of an outline.

The outline. I will gladly say that before college, I was a panster but once I went to college and started working on screenplays and teleplays I was forced to outline and I grew to really love it. But not this outline. I have five different versions of this outline. Five. And they’re not small ones either. They all range between seven to eleven pages single-spaced. What can I say, I’m detailed orientated. So, just in case you thought I was slacking, I wasn’t, life just got super busy and I wasn’t decisive and I think that’s the overarching effect of the election on me—lack of direction.

It was hell and then some. I was so excited about graduation but everything was just moving too fast. I had the honors dinner, all the last minute graduation stuff, finals, work, and that damn screenplay. I was overwhelmed and wasn’t getting enough sleep. That lead to me writing about one hundred to two hundred words a day and it wasn’t like I was writing every day either. By the time graduation rolled around, I wasn’t finished with the screenplay and it took most of the joy from graduation and left me with nothing but the stress. Over the next four days, I hunkered down and wrote 58 pages, finishing my senior project five days after the graduation ceremony. By the end of the week, I received my grade and was thankful that I’d passed because it meant that I’d officially graduated. And all the stress and emotions from the school year and graduation drained from me once I realized that I’d passed. I was done. Free. Somewhat whole again.

One thought on “The Election Messed With My Writing”

Hi, my name is Tyler B. Humphries and I was born and raised in St. Louis, MO, USA. I graduated from Webster University in 2017 with department honors from the Department of Journalism and Communications, a BA in Scriptwriting and a minor in International Human Rights. I’m a writer and photographer. I enjoy traveling and have been to 8 countries so far, apart from the United States: Switzerland, the Netherlands, the Republic of Ireland, Northern Ireland, Greece, Italy, Iceland, and Germany. Before I die, I want to travel to all seven continents but until then you can catch me binge-watching television shows and documentaries on Netflix.